Empowering Women in the Workplace 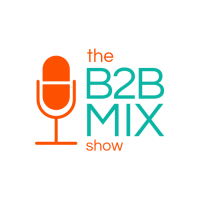 The B2B Mix ShowWelcome to The B2B Mix Show. We’re focused on digital marketing and sales topics to help you elevate your B2B brand. Check back on Mondays for new episodes.
0.75x
1x
1.25x
1.5x
2x
0:00
...
Apple PodcastsGoogle PodcastsStitcherSpotifyShareLeave a ReviewListen in a New WindowDownloadSoundCloudSubscribe on AndroidSubscribe via RSSSpotifyPlayer Embed

We’ve come a long way when it comes to empowering women in the workplace, but there’s still room for improvement. Our guest for this episode has some insight to share with women and men on this topic.

We’re joined by a major supporter of #WomenInSales Carole Mahoney. Carole is the founder and Chief Sales Coach of Unbound Growth. She’s shared videos and articles to help women overcome various situations that arise in the workplace.

In this episode, we talk with Carole about:

Want to get in touch with Carole?