Employees Are Your Best Advocates Anatomy of a Brand Advocate

In social media, there is nothing more powerful than someone advocating for your brand. Advocates give their friends, families and colleagues trusted advice that is far more credible than any source of advertising. They defend a business against negative messaging in the countless small interactions that determine a brand’s health. They volunteer ideas for product and service improvements. And they do it all for free.

It’s no wonder, then, that just about everyone is looking for advocates. Companies are executing deliberate social media programs to find, activate and maintain these vital assets. Understandably, current engagement efforts are focused on making evangelists out of customers, widely considered the most authentic and valuable spokespeople. Influencers in the news media, academia and other fields are also cultivated. But while enterprises reach out to these external constituents, the best potential advocates hide in plain sight — their own employees.

Employees Are Your Best Advocates

While not without its challenges, widespread employee advocacy is the surest, cheapest way to scale up a company’s social media reach. Instead of achieving linear growth in customer advocacy through incremental investments in social media teams, an enterprise can magnify its reach at very little cost by activating a broad cross-section of its existing workforce. The following illustration compares the maximum achievable social audience of an average Fortune Global 100 company to the maximum achievable social audience of its employees. 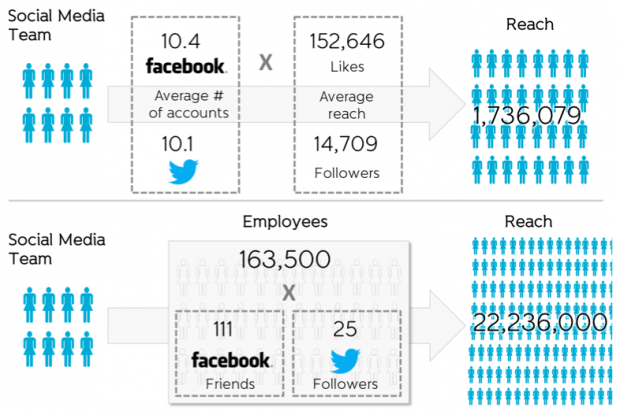 The aggregate figures do not represent “unique” followers because corporate accounts have overlapping audiences, and employees have a number of social contacts in common with other employees. But in the case of employees, this overlap, or “network density”, is less significant than common sense might suggest.Pew Internet found that on Facebook, “people’s friends lists are only modestly interconnected”, with a network density “low in comparison to studies of people’s overall personal networks”. Your employees’ Facebook networks aren’t echo chambers, but viral gateways.

Each employee can be the first link in a long chain of intimate, person-to-person shares. By increasing the number of starting points for social sharing, a company greatly improves its chances of viral marketing success. Although many advertisers have sought the support of highly-connected “influentials” to initiate viral marketing campaigns, research indicates that the most likely path to virality is a “big seed” strategy. In this approach, viral ideas are seeded by a large selection of first-generation sharers, instead of a relative handful of highly- connected people.

Big-seed theory emerged from the computer simulations of sociologist Duncan Watts, but it has real-world evidence to back it up. A combined study of billions of page views by Buzzfeed and StumbleUpon found that “stories go viral when lots of people engage with their normal-sized circles to share content.” Marketing researcher Yuping Liu-Thompkins has also determined that when seeding content, “it is better to have a large number of easily influenced individuals than to have a few highly-connected hubs in a social network.”